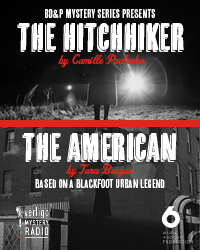 Ep. 2 The Hitchhiker | The American

× THE HITCHHIKERTHE HITCHHIKER BY CAMILLE PAVLENKO DIRECTED BY CHRISTIAN GOUTSIS ASSISTANT DIRECTOR KATHRYN SMITH SOUND DESIGN BY PETER IRWIN STARRING KIRA BRADLEY, TOM CAREY & ANNISHA PLESCHE On a stormy night, Kara is driving home from a day trip to Canmore and against her father’s advice, is returning via Old Banff Coach Road. With its narrow lanes and dark curves, she suddenly comes upon a young woman standing alone in the middle of the highway. Drenched from the rain and visibly shaken, Kara offers her a ride into the city. By the eerie glow of the dashboard light Kara soon begins to realize that her passenger is not what she seems.

Buy To This Event Directions